It’s Christmas time and Christmas and Santa go together like peanut butter and jam. Santa Claus is one of the most beloved icons of childhood folklore but some comic book writers and artist have a radical different take on him. So if you want something less cliché to read this Christmas, check out my favorite, weird and outrageous takes on the generous guy from the North Pole.

1. Santa as a superhero 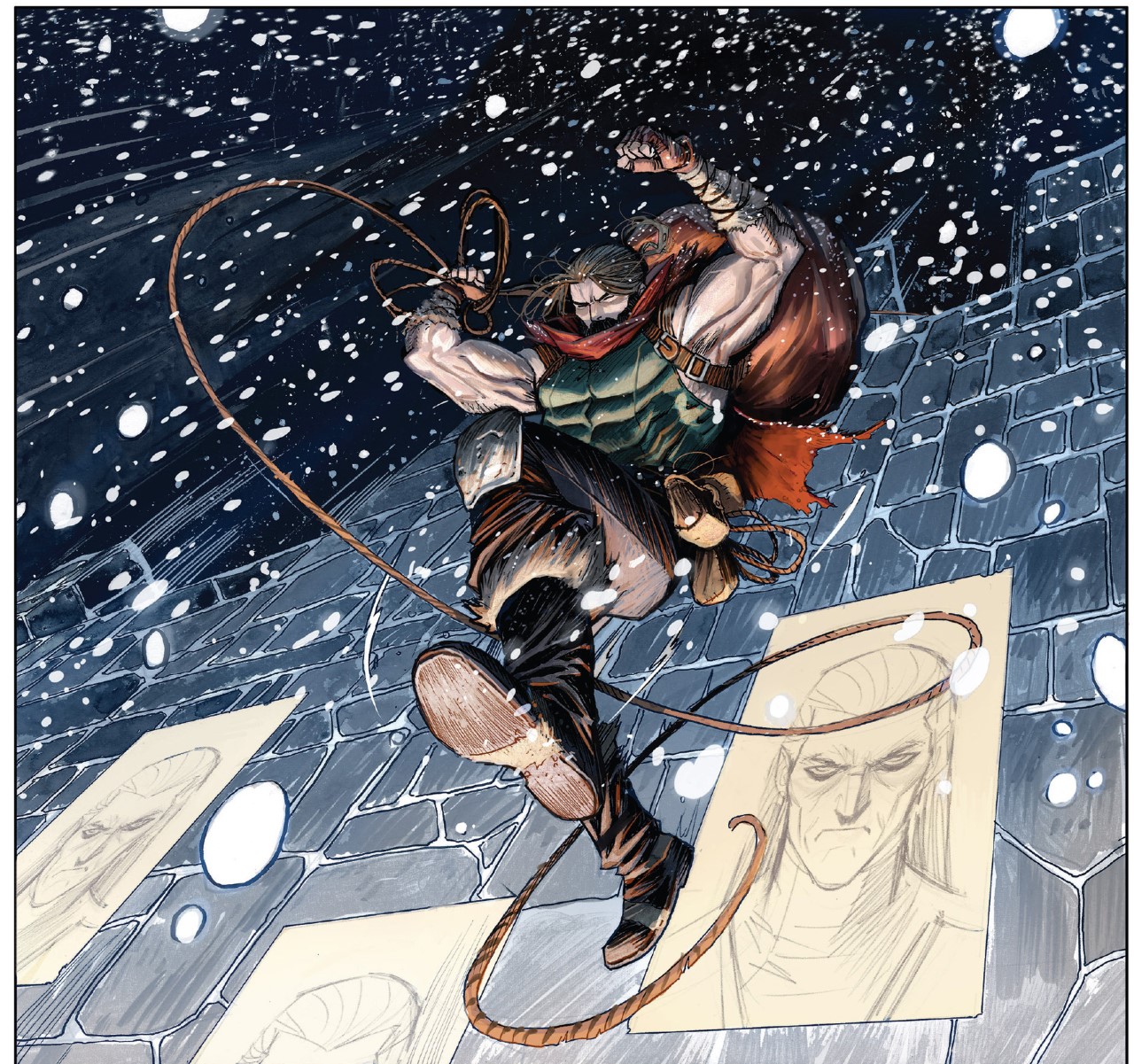 In ‘Klaus: How Santa Claus Began‘ Scottish writer Grant Morrison and artist Dan Mora present an alternative history of Santa Claus. The story takes place in a dark fantastic past at Yuletime. Tyrant Magnus runs the town of Grimsvig with an iron hand. He has outlawed fun and forces all adult men to work in the coal mines. But that’s just a ruse because he wants them to free Krampus, a monstrous entity trapped in the mines that has promised Magnus ultimate power.

When Klaus returns to Grimsvig after years of absence, he notices how desolate the village has become. Inspired by the Yule-spirits in the forest he decides to make and deliver toys. When Krampus is freed, the beastly demon comes to get all the naughty children from the village to eat them, including Magnus’ son. Only Klaus can stop him.

Morrison and Mora draw on Santa’s roots in Viking lore and Siberian shamanism, putting folk legends like Robin Hood and tropes of the Superhero genre in the mix. They re-imagine Santa Claus as a brawny action hero, and deliver a story that’s lots of fun and beautifully illustrated with vibrant colors. ‘Klaus’ is by far my favorite depiction of Saint Nicholas in comics.

2. Santa is a merciless slave owner 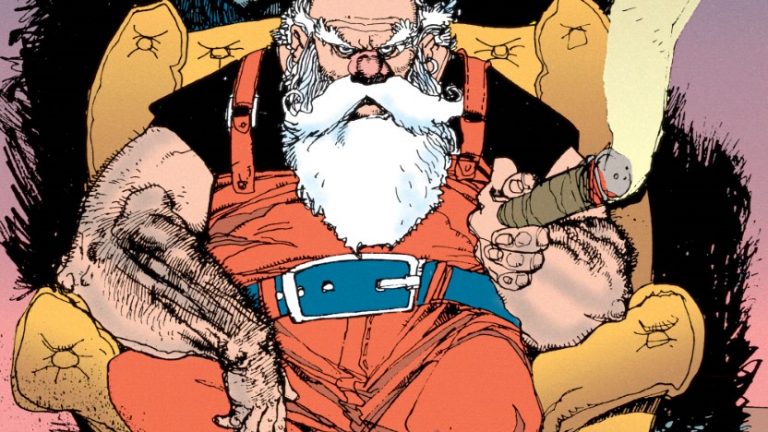 In ‘Lobo: Paramilitary Christmas Special‘ Santa Claus is depicted as a merciless slave owner known as Kris ‘Crusher’ Kringle. He’s a brutal dictator slammed by Amnesty International, and running his factory fortress on the North Pole. Malnutrition keeps his army of elves small in stature but fit for battle and fierce as ferrets. The poor elves only get one tea break a year. Only highly sophisticated public relation techniques and a once a year charity plunge, aka Christmas, keeps Santa’s image as the benevolent good up with the public.

The intergalactic bounty hunter Lobo is hired by the Easter Bunny to assassinate Santa because he wants to eliminate the competition. Christmas has become too big, and The Easter Bunny simply cannot compete.

After massacring dozens of elves in Santa’s fortress, Lobo and Santa duke it out in mortal combat with sharpened shivs. Santa proves to be quite the badass, but (spoiler alert) in the end gets decapitated by Lobo. After the battle Lobo takes Santa’s place. He uses the workshop to make bombs. Flying across the sky in Santa’s sleigh, he drops bombs on anyone who is on the naughty list.

This subversive depiction of Santa was dreamed up by Alan Grant, Keith Giffen and Simon Bisley. Santa violently fighting Lobo is an image one doesn’t easily forget. 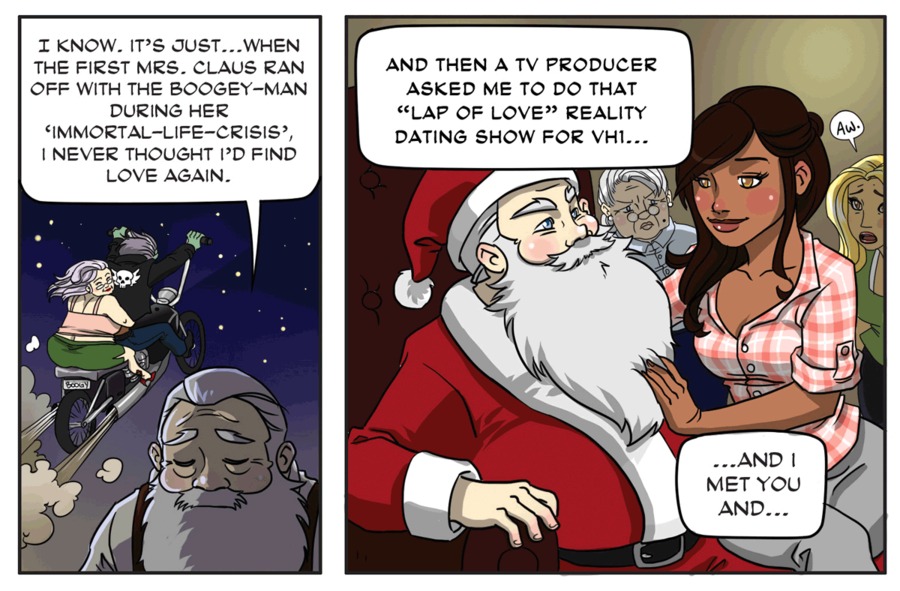 The comic ‘Santa Versus Dracula‘ by writer Melissa Dejesus and artist Ed Power is as funny and weird as it sounds. Count Dracula wants to obtain Saint Nick’s ability to gain entrance into any home, so he decides to become the new Santa Claus. The catch: to become the new Santa, he has to kill the current one. That’s why he gathers the forces of darkness to help him invade the North Pole. Santa, Mrs. Claus, Jack Frost and the other forces of Christmas are forced to defend their home.

‘Santa Versus Dracula’ is filled to the brim with pop culture references, with Dracula being annoyed because his goth teen minions like the Twilight Saga, and Frankenstein’s Monster duking it out with Frosty the Snowman. The Silent Knights, the defenders of the North Pole, are lead by the elf Nick Frosty, a nod to Marvel’s Nick Fury. Last but not least, when Mrs. Claus ran off with the Bogey-Man during her ‘immortal-life-crisis’, Santa was heartbroken. However, he found a much younger, sexier trophy wife when participating in a reality dating show.

This epic Christmas story was published by SLG Publishing in November  2013. 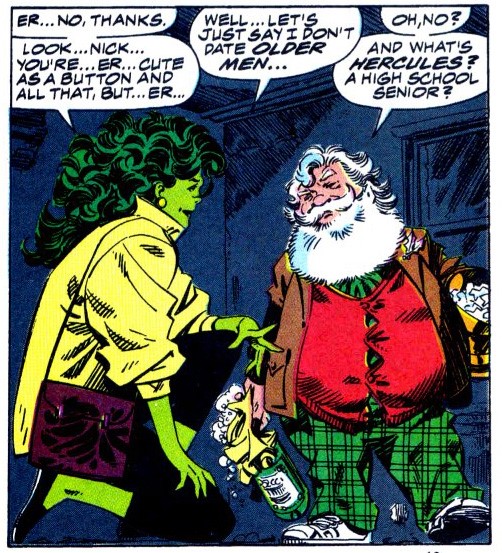 When artist John Byrne started the second volume of She-Hulk comics, titled ‘Sensational She-hulk‘, he made sure the emerald beauty was consciously aware she is a comic book character. If breaking the fourth wall wasn’t weird enough, in issue 8 he introduced Santa Claus as Nick St. Christopher, playing the world’s greatest detective.

Nick helps She-Hulk solve a case for the district attorney, by getting proof a suspect has indeed murdered seven people. She-Hulk might be fooled in the beginning, but the reader has no trouble recognizing Santa Claus in Nick St. Christopher. Not only does he look like Santa in casual ware, he also uses magic powers we’ve come to associate with the character. For starters, because Santa instinctly knows who’s been naughty and who isn’t, Nick knows for sure the suspect is guilty. Entering the apartment of the suspect is no problem for one who can enter any house by going down the chimney, getting She-Hulk into the house the same way. When Nick has found a witness that will close the case, he transports She-Hulk and himself instantly to Australia to question said witness.

However, St. Nick has personal motives to help out She-Hulk, and makes a pass at her twice! But who could blame the old man, since She-Hulk is beautiful, heroic and sexy. Well, Mrs. Claus isn’t happy with her husband’s shenanigans and takes him back to the North Pole. Thinking She-Hulk was leading him on, Mrs. Claus makes sure the heroin’s office is filled with reindeer droppings.

‘The World’s Greatest Detective!’ is a lighthearted tale by Byrne that fits perfectly with the humorous tone of his She-Hulk series. The title is a pun by itself since Batman is usually called “the world greatest detective.” Or was it Sherlock Holmes? Anyway, it’s a lot of fun to see Santa Claus in a different role, but still using his powers. Who knows, maybe he is moonlighting as a magic Columbo the 364 days it isn’t Christmas. 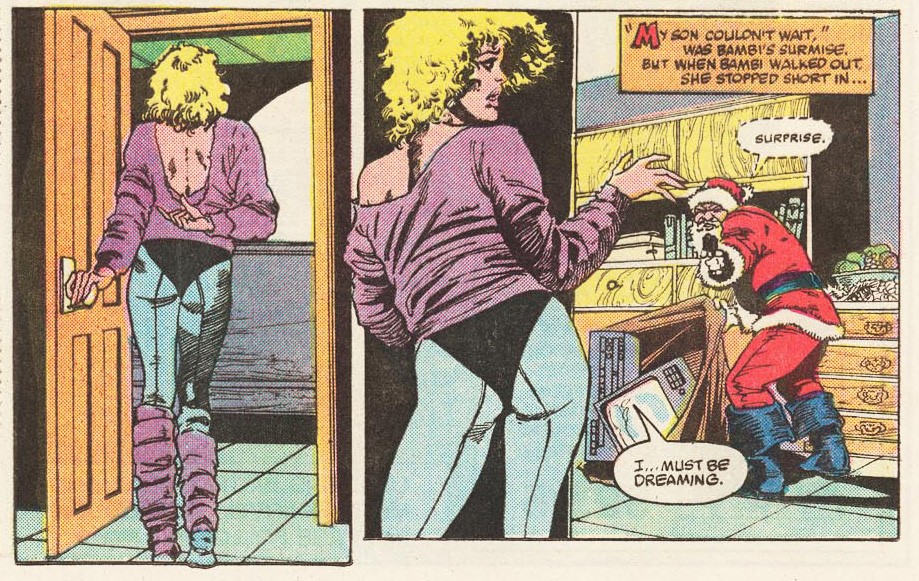 The She-Hulk team-up with Santa the Sleuth, isn’t his only appearance in the Marvel Universe. Frankly, St. Nick pops up in so many Marvel Comics he has his own Marvel Wikipedia page!

However, in ‘Peter Parker, The Spectacular Spider-Man‘ 112, writer Peter David and artist Mark Beachum present a pretty subversive take on the Santa myth by dressing up a burglar as Santa Claus. When kids in the department store sit on his lap and tell ‘Santa’ what presents they want for Christmas, Santa makes sure the kids tell him whether their parents have anything of value stashed in their homes. If they do he asks them where they live. At night this bad Santa breaks in to steal the goods. That is until he gets caught stealing by Bambi who happens to be Peter Parker’s neighbor. Santa threatens her with a gun, which makes Spider-Man’s spider-sense go off. Spidey comes to the rescue but Bad Santa is able to escape to the roof only to run into the real Santa Claus, who forces the burglar to better his life. He confesses his crimes to the police, and spends Christmas giving away Santa’s gifts.

When I was a kid, this story made quite the impression and since then I’m always a bit wary when I come across a guy dressed as Santa Claus. I’ll never give him my home address, that’s for sure.