Reading comics is great. Watching other people talk about them might be even greater. Besides running my own YouTube channel (in Dutch), I spend a lot of time checking out videos on comics and the comic book world, eager to discover new artists, writers and series. These are my five YouTube channels that deal with the rich history of American and British comics and comic tropes, or focus on artists, drawing styles and techniques. There’s a lot to learn for readers and (aspiring) comic book makers. 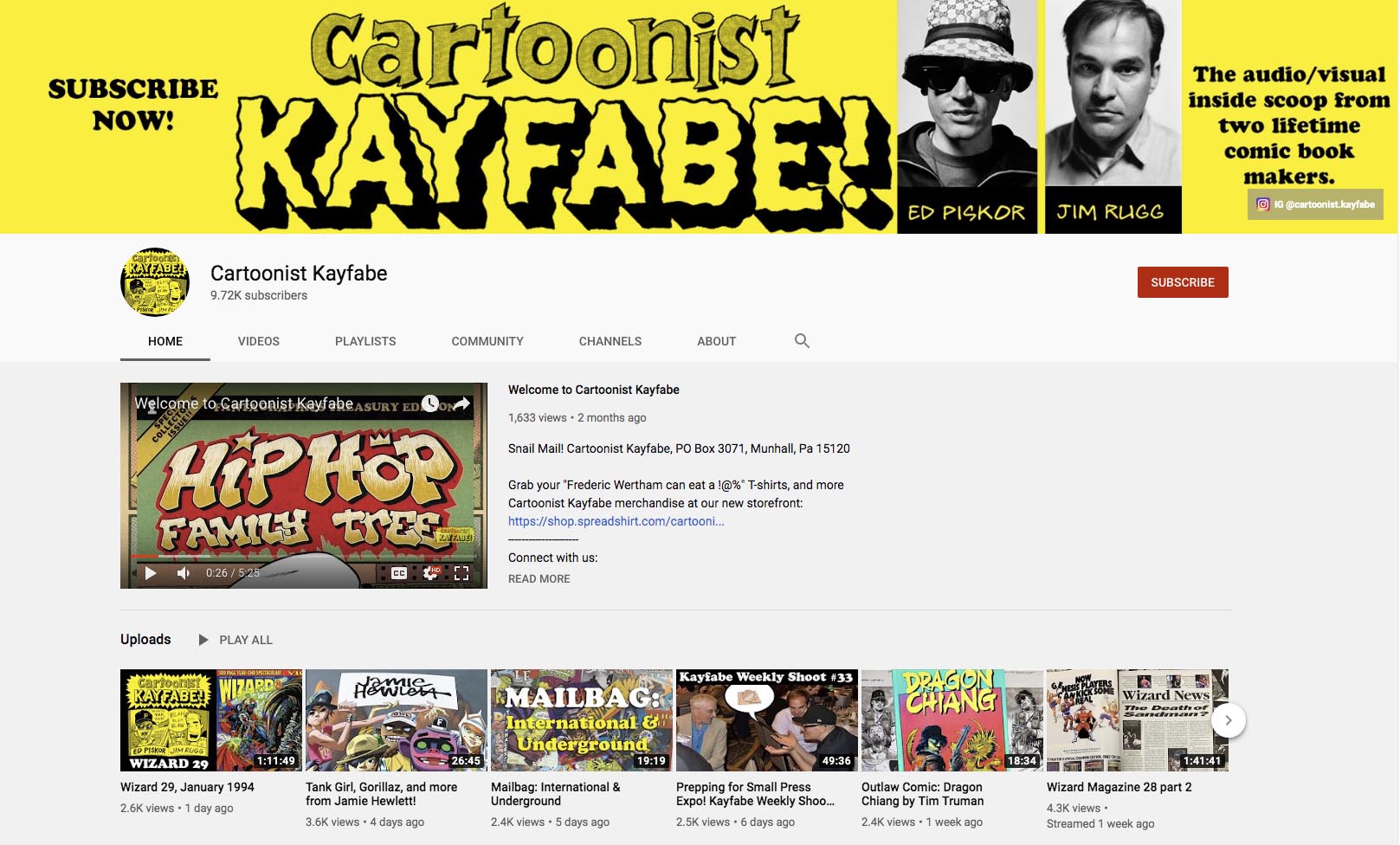 Cartoonist Kayfabe is the channel of comic book artists Ed Piskor and Jim Rugg. Currently their videos on the comic book world are my favorite. They are filled to the brim with interesting information.

Being artists themselves, Piskor and Rugg offer an inside look on the art of making comics. At the same time they are comic book collectors and their passion for the medium is apparent in every episode. Sometimes colleague Tom Scioli is a guest, who offers interesting insights.

Piskor and Rugg host different series on their channel. In the weekly show, The Magazine Commentaries, they meticulously go through an old issue of Wizard Magazine. This was a monthly magazine about comic books published in the US by Wizard Entertainment between 1991 – 2011. They add a lot of interesting context and show relevant comic books from their own collections. It’s a great way to learn about the comic book industry of that particular period.

They also interview some of their peers, focus on particular comic books, series and artists, and give weekly updates on their projects and working life. The Show and Tell series might be the most interesting show on their channel. In every episode Piskor and Rugg focus on a particular theme that should be of interest for every aspiring comic book artist and aficionado.

In this particular episode, they focus on Ed’s comic, Wizzywig, from its humble beginnings as xeroxed zine shipped from his mother’s basement to the more familiar hardcover graphic novel that’s easily found in your local comic shop. The episode offers some food for thought for enterprising young creators on their path to making and publishing comics. 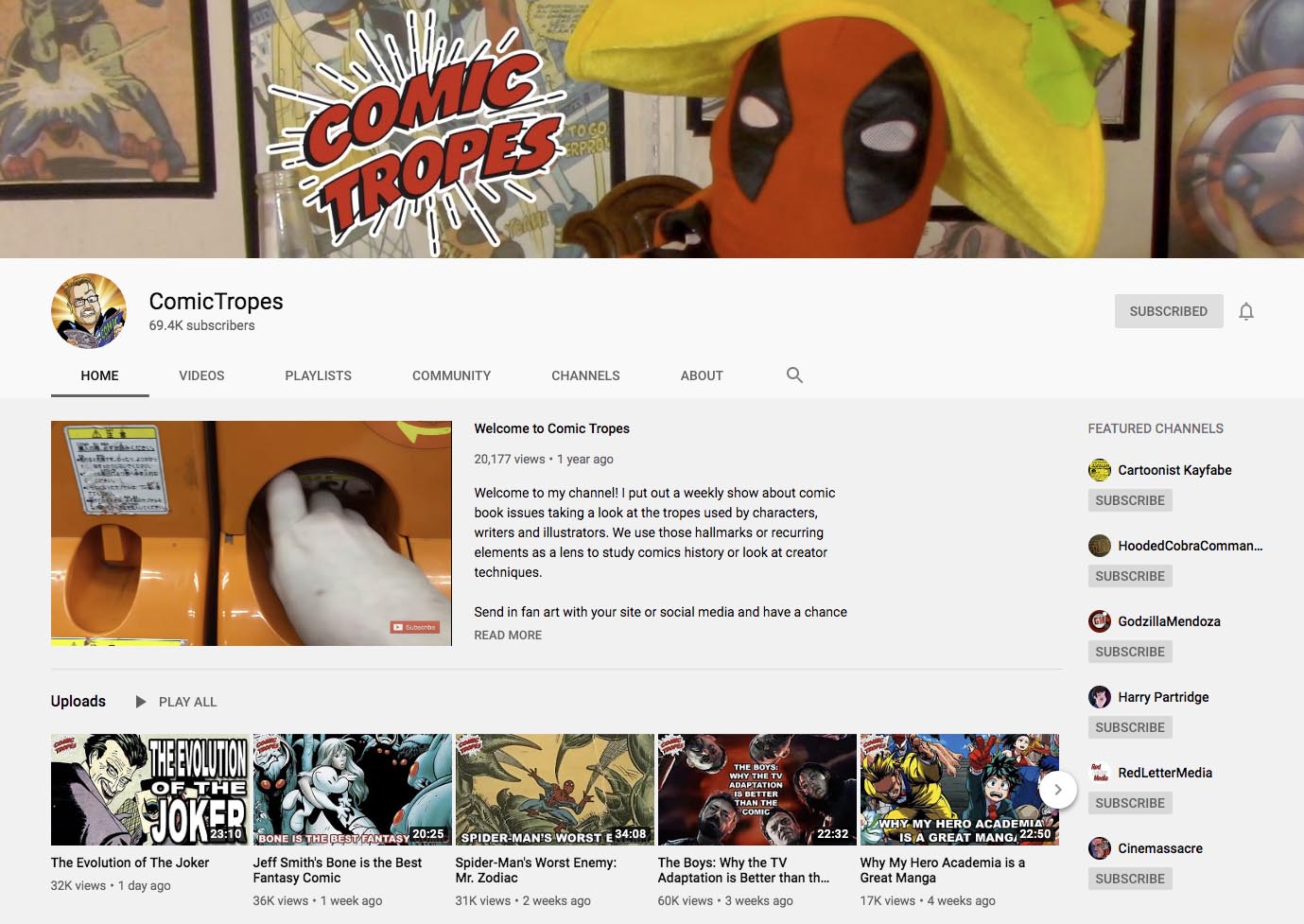 Chris Spiers of the YouTube Channel Comic Tropes sums up its purpose as follows: “Reviews of comics, both good and bad. Primarily I look at the recurring elements that creators or characters use. It’s all just an excuse to drill down on various comic books.”

Han Solo’s Worst Adventure, Death Note and Its Use of Psychological Thriller Tropes, Bernie Wrightson’s Swamp Thing, Lady Cop: A 70s Comic that Tried (and Failed), and Is Mark Bagley a Great Spider-Man Artist? are just some interesting videos on this channel.

Comic Tropes contains a lot of insightful, well researched videos that are also very entertaining to watch. The show’s host Chris presents everything with a comedic and light touch. And he isn’t afraid to offer his personal opinion and reading experiences, like when he’s dealing with the controversies surrounding Cerebus author, Dave Sim.

The video about America Splendor is a great example of how Spiers relays interesting information in a personal and enthusiastic way:

Richard Friend works in the mainstream comic book industry. He worked as an artist, inker and colorist on numerous flagship DC Comics titles, including Batman, Wonder Woman, Green Lantern and Superman. He also runs a YouTube channel with over 8,800 subscribers. His channel is about comic art and drawing and about how to trouble shoot problems working as a professional artist, whether technical, mental or financial.

Like the guys of Cartoonist Kayfabe, Friend offers a perspective as a maker but acts like a fan. His enthusiasm for the medium and his peers seems limitless and frankly is quite contagious. I particularly enjoy his Super Fun Sunday episodes in which he takes a very close look at a particular book or artist. One can learn a lot about cartooning just by looking closely at a panel and listen to Friend commenting on it.

Friend also looks at his own inking work and makes close up videos while he’s working. And he tackles particular subjects, such as the fundamental building blocks of drawing superheroes or how to create details in your artwork using the feathering and splatter techniques.

One of my personal favorites is this look at the artwork of Marc Silvestri, one of my favorite X-Men artists: 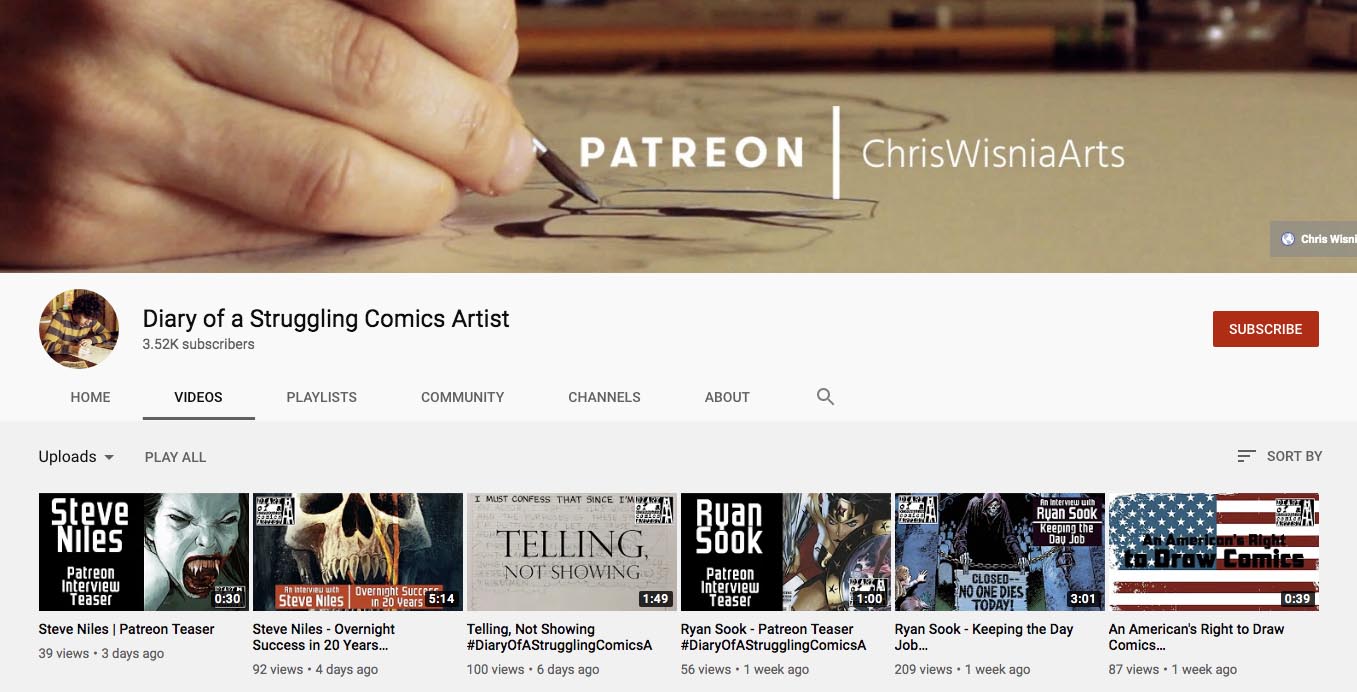 Struggling comics creator Chris Wisnia examines the difficulties of trying to make it in the comics industry. Usually he makes short video interviews shot at the artist’s home or at conventions, covering questions about the struggle of making it in the comic book industry. In the process, he gets the perspectives of dozens of famous comics creators, such as Neal Adams, Cecil Castellucci, Kelley Jones, Steve Englehart and Robert Kirkman.

For instance, Frank Cho, famous for his comic strip Liberty Meadows and drawing sexy, beautiful women, explains in the video how his Korean parents never believed in his comic book work and rather wanted him to pursue a career in nursing, even after he became successful with Liberty Meadows.

So even though this channel shows the hardships and the downsides of working in the comic book industry, it also sends a hopeful message; the artists he interviewed were all struggling to get heir work noticed, but eventually became quite successful or even big stars. Diary of a Struggling Comic Book Artist shows that the struggle pays off in the end.

Often the interviewee gives good tips for aspiring comic book artists, such as this interview with Todd McFarlane on how to present your work to publishers: 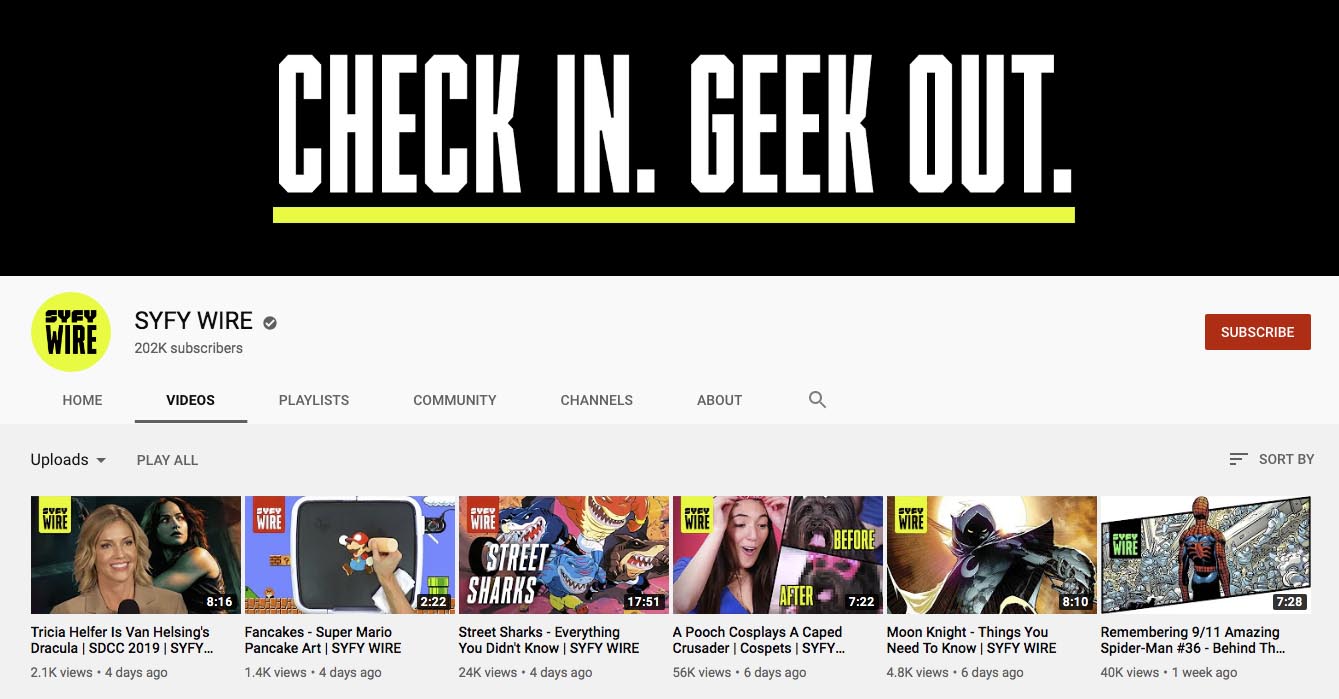 Although SyFy Wire focuses on any commercial geek outing, including movies, tv series and books, it’s worth watching for the interviews with some great American comic book artists. Where else do you get to see the inside of John Byrne’s art studio? Or watch Marc Silvestri drawing The Darkness at his drawing table? We get an inside look while the artists often convey useful drawing tips. Other videos cover a certain phenomenon, like the acclaimed Batman: The Animated Series from the 1990s.

In the interview with inker Klaus Janson, we get an in depth look at Janson’s and Frank Miller’s close collaboration on their Daredevil run from the late 1970s and early 1980s. Their run on the book is legendary and brought new life to the character.  We learn what a great inker like Janson brings to the table and what the difference is between drawing full pencil and doing breakdowns.

The production value of the SyFy Wire videos is oftentimes better compared to the vloggers who work by themselves or with a very small team. However, this doesn’t make those vlogs any less valuable in my opinion. In fact, I am partial to watching media made by individuals or a small group because they tend to be more original in their approach to subjects compared to media made by professional corporations.