It may seem that Marvel’s focus on diversity and representation is a recent development, but that’s not entirely true. From its early days, the Marvel Universe has had a diverse cast of characters. Black Panther, Luke Cage, Falcon, Sunspot, Danielle Moonstar, Karma, Storm, Blade, Puma, Daredevil and Rocket Racoon (shouldn’t genetically engineered animals be represented as well?), have been around for quite some time. And let’s consider The Vulture, one of Spider-Man’s deadliest foes, as an example of an old guy who is still energetic and kick-ass. The same goes for Peter Parker’s aunt May and many other supporting characters in Marvel stories. Let us know who your favorite diverse superheroes are on Facebook or Twitter.

In recent years Marvel added characters like America Chavez, Ms. Marvel, a female Thor, a Korean-American Hulk, a black Spider-Man and a black Captain America and so on. Not that all these efforts at diversity have been successful; a lot of solo titles with non-white and/or feminist characters have been cancelled after a relatively short run.

Still, representation matters. A lot. When you check the letter pages of ‘America’ for instance, the comic revolving around America Chavez, Marvel’s first Latin-American LGBTQ character to star in an ongoing series, readers express how happy they are to finally read about heroes that look like them, that have to deal with the same stuff as they do. As Nathan Hinojosa writes: ‘I have to thank y’all for representing Latinas, and giving me a character that my daughter could one day look up to and admire.’

However, ‘America’ has been cancelled after only 12 issues because of poor sales. According to some detractors, this has everything to do with poor writing and the comic being too preachy.

Personally I find minority superheroes that are a direct rip-off of existing characters a sign of a lack of creativity. The black superhero Sam Wilson, who played Captain America for a while, comes to mind. And the female version of Thor. Wilson was a great character in his own right as the Falcon. I find these solutions rather insulting to the reader. I’d rather see NEW superheroes with a diverse background and sexual orientation rather than those lazy, non-creative variants of existing heroes. People who feel they need to be represented more in fiction deserve better. And frankly the same can be said for all readers.

Come on, Marvel! Introduce new interesting gay, lesbian, transsexual, asexual and whatever characters instead of ripping off existing characters. Marvel doesn’t call itself ‘The house of ideas’ for nothing. Those words are better worth something! Thankfully, a lot of times those ideas are pretty good as you can see by this short list of great Marvel characters. 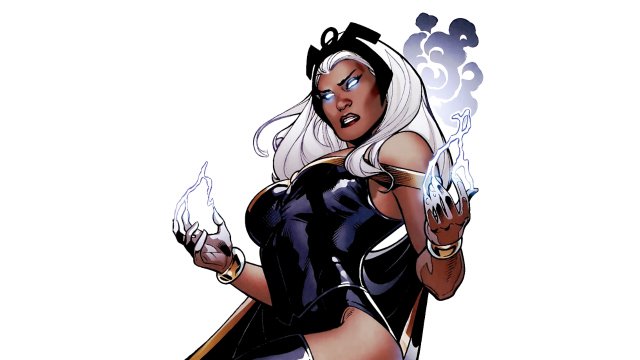 The X-Men comics thematically are all about prejudice and discrimination. The comics revolve around mutants, people whose special powers manifest at puberty. The mutants are often hunted down and discriminated by society: people are afraid of them because of their abilities. The mutants are a metaphor for how society deals with ‘The Other’ and ‘The Outsider’.

Granted, sometimes mutants look pretty weird: Nightcrawler looks like a blue colored devil or demon, and Beast looks like, well, a blue furry animal. Because of the main theme, it makes sense that the X-Men team consists of a very diverse cast. Although that wasn’t really the case when Stan Lee and Jack Kirby created the team in 1963, the rebooted version from 1975 by Len Wein and Dave Cockrum has a very diverse membership with international roots. For instance, Wein and Cockrum introduced Storm. Her real name is Ororo Munroe, and she’s the child of a tribal princess of Kenya and an American photojournalist, David Munroe. Storm is able to control the weather and atmosphere. She’s one of the most powerful mutants on the planet and some think she’s a goddess.

Storm suffers from claustrophobia: when she was five years old a plane crashed on their home, killing her parents and also burying Ororo who survived. A weakness that makes her more than human, but her humanity comes from a love of all life, and being very much in touch with nature and the spirit of our planet. Since her introduction Storm has grown tremendously as a character, eventually becoming the leader of the X-Men and a mother figure to young Kitty Pryde, a fellow X-Men. Even when Storm lost her powers, she was still a very capable warrior and leader. All this makes Storm one of the coolest Marvel characters ever, and one of my favourite X-Men. 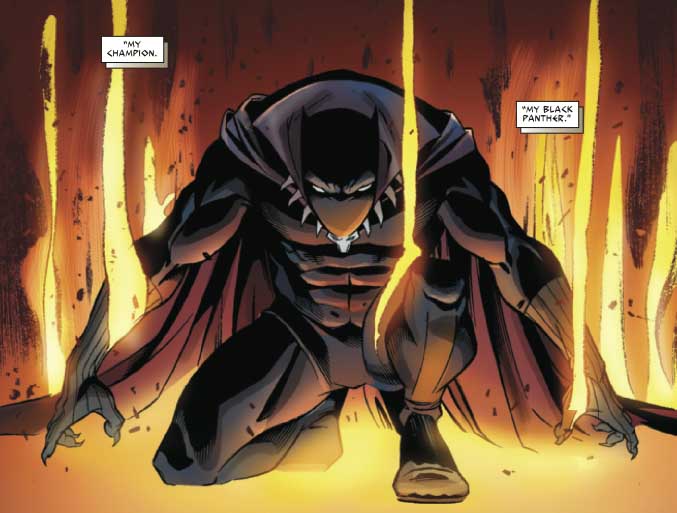 Created by Stan Lee and Jack Kirby, Black Panther made his first appearance in Fantastic Four #52 (spring 1966). Black Panther is a loyal member of the Avengers and has been a part of the regular roster of Marvel heroes since his creation. In the last five decades numerous Black Panther series have been published and cancelled at one time or another. As far as I know, he’s the first black superhero ever. Black Panther is T’Challa, king of the fictional African country Wakanda. T’Challa is a nobel character that divides his time between being a superhero and his duties as the leader of Wakanda. With Wakanda, Lee turned some stereotypes about Africa on its head. Instead of being poor and backwards, Wakanda is technically the most advanced country in the world and one of the richest thanks to a Vibranium mine, a rare metal that is the source of their technical expertise. As the Black Panther movie from director Ryan Coogler has shown, T’Challa’s kingdom is a bit of a weird mix of African tradition, modern technology and superhero lore. But that’s also part of the fun of Black Panther’s world. 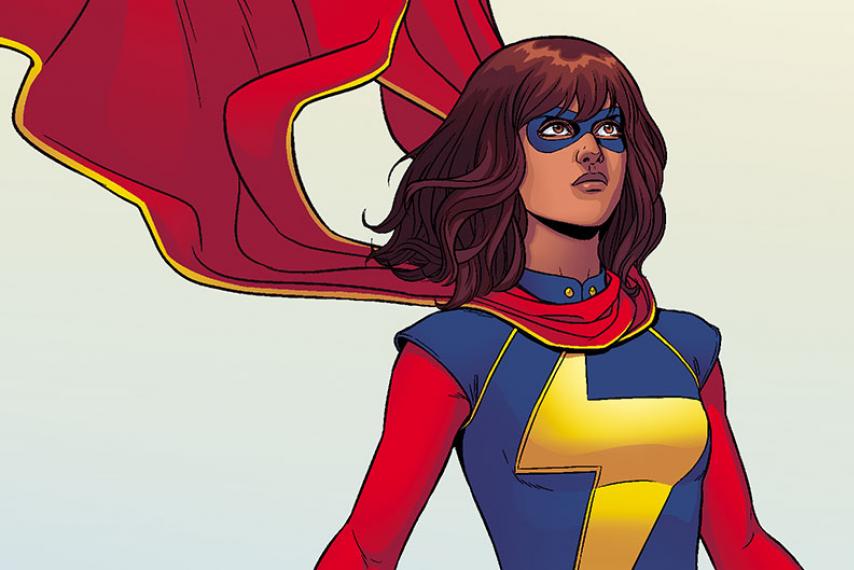 Kamala Khan is a sixteen-year-old Pakistani-American girl from Jersey City. She idolises superheroes, especially Carol Danvers who calls herself Captain Marvel (she used to be Ms. Marvel). Kamala has a hard time fitting in: she is a Muslim and her parents try to bring her up according to their faith. Obviously, they don’t like their teenage girl to go to parties where boys attend as well and alcohol is being served. Her older brother spends his time praying all day, wearing traditional clothes, much to the chagrin of their father who’d rather see his son get a job. Kamala is living between two worlds, not really fitting in with either of them. Some of her white American school buddies, particularly Zoe, have no problem pointing out that she’s the odd one out. When Kamala is bestowed superpowers, her life gets even stranger. All of a sudden she can change her appearance to whomever she wants, even her mother, and she can stretch her body to become very big or very small. She also heals a lot faster than before. Kamala becomes the new Ms. Marvel.

Kamala’s story is also about trying to determine your identity, accepting who you are and not being afraid to show it. These are important issues for teens, and typical for coming-of-age stories.

Kamala is actually the fourth character called Ms. Marvel in the Marvel Comic books, but she’s the first Muslim character to headline her own book. Ms. Marvel was created by G. Willow Wilson and Adrian Alphona. This new Ms. Marvel is one is one of the most successful non-white superheroes introduced in the last couple of years. 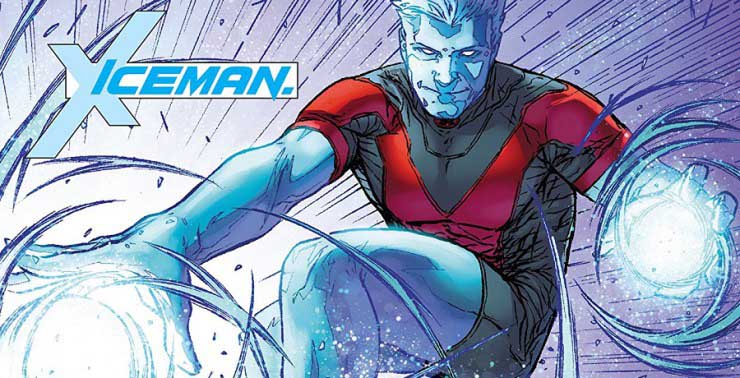 Robert (Bobby) Drake was one of the original X-Men. As his moniker indicates he can generate, manipulate and fully control ice, snow and cold temperatures. He can also use his mutant ability to freeze any air moisture into super-hard ice. He’s also pretty funny and like Spider-Man cracks jokes during the fights.

Recently Bobby came out as being gay. This happened in a wonderful scifi way that only the people at Marvel could come up with. The young X-Men time travelled from the past to the present. When young telepath Jean Grey accidentally reads young Bobby’s mind, she discovers he’s been living in the closet. When young Bobby confronts his older counterpart he admits he’s been gay all this time as well. This was a bit of a surprise for a lot of readers, because Bobby has had heterosexual relationships in the past, including a thing with the wonderful Kitty Pryde.

The series ‘Iceman’, written by Sina Grace and illustrated by Alessandro Vitti and Edgar Salazar, deals with Bobby coming to grips with his homosexuality and his coming out to the world. Besides having to fight bad guys like Juggernaut, he also has to deal with dating apps. His parents aren’t too happy with their son being a mutant, and when Bobby finally confronts them with being gay, they have a very hard time dealing with this as well. (In a way, coming out as a mutant is a metaphor for coming out in general.)

When his mother remarks that him being gay doesn’t make any sense since he has had a lot of girlfriends in the past, he replies: ‘Don’t you wonder why none of them stuck around, mom? […] Haven’t you ever been with someone and know deep down that it’s not right? That’s how it’s felt with EVERY girl … EVERY time.’

Although the argument can be made that this coming out scenario is rather textbook like because we’ve seen it a lot in queer media, it’s still very well executed. Too bad ‘Iceman’ has also been cancelled after 11 issues. 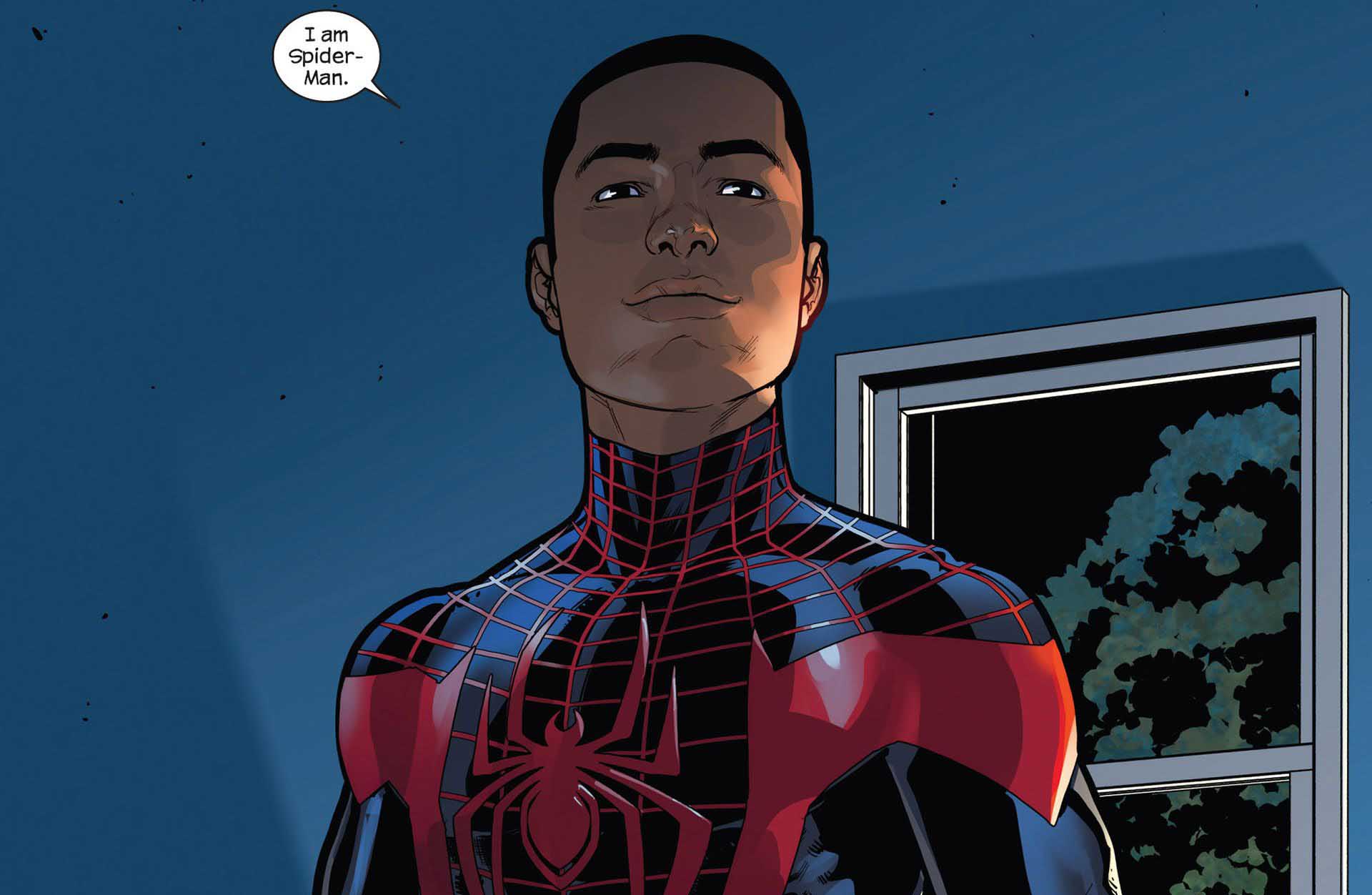 An argument can be made that too many Spider-Man-like characters are currently walking around in the Marvel Universe: with Spider-Gwen, Silk and Miles Morales, to name just the most important ones. Technically speaking Miles Morales is a rip-off of Spider-Man, so therefore he shouldn’t be on this list. But he’s an original new character created by Brian Michael Bendis and artist Sara Pichelli, and that makes him a better option when it comes to diversity than let’s say an already existing African-American character playing for Captain America. Also, the Black Hispanic teen has conquered the hearts of many comic book readers and is to star in his own animated feature.

Miles Morales possesses powers quite similar to those of the original Spider-Man, which were derived from the bite of a genetically engineered spider. But as a bonus, Morales has two abilities that the original (Ultimate) Spider-Man does not have. Morales is able to camouflage himself and his clothing, to match his surroundings. Also he has a venom strike that can paralyze most people just by touching them.

In the current comics, Morales is Spider-Man in the mainstream universe, so now there are two Spider-Men swinging around in New York. Although my Spidey will always be Peter Parker, Morales is a great example of representing minorities in superhero comics.