After more than 8 years of development, Rockstar Games has finally released their second instalment of their successful Red Dead franchise. The game developer had to push new boundaries to meet expectations, especially after the immense success of GTA V – financially the most successful entertainment title of all time. With Red Dead Redemption 2, Rockstar has once again proven that they master the art of worldbuilding. 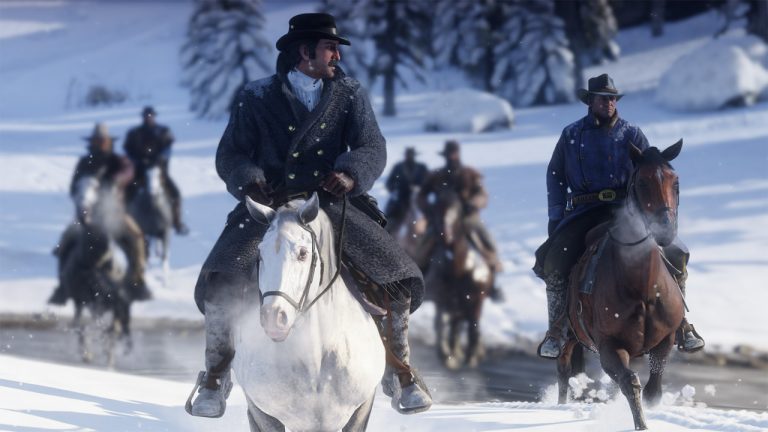 Yassin Karmoudi shares his 5 favorite moments from the game with videos found on YouTube to illustrate them.

Headphones on, controller in my hands, and almost straight away my mouth fell open. The soundtrack and the eye-catching graphics take you straight to the end of the era of the cowboys’ gangs in the Wild West – an era in which their way of life was under threat of industrialization. You sympathize with the characters, they are interesting, and they live in an open and ‘breathing’ game world that feels alive. The amount of detail the creators put into this game is almost unfathomable.

The way the light of your oil lamp is reflected in a blizzard, the traces that your horse leaves behind in the snow; it is like looking at a moving Rembrandt painting. Playing a game in a well-established story world is like entering a new reality. And the reality of Red Dead Redemption 2 is very convincing on all levels. It’s almost an understatement to call this game ‘immersive’.

The Good, The Bad and The Ugly

Choices, choices, choices. As in real life, in RDR2 you are sometimes faced with a difficult dilemma. How do you deal with people who did you wrong? Do you shoot them, or do you let them go, knowing that they might want their revenge later on? If you let them live, they might be able to help you out with something later… Or do you show no hesitation whatsoever and shoot off their limbs with your shotgun. What I discovered about myself is that I would not have been much of a pacifist cowboy if I had lived in the Wild Wild West. On the contrary… That brings me immediately to the following:

Those with loaded guns and those who dig

Once you are comfortable in the game and you know your way around, the game really starts to kick into high gear. This world is alive! As you ride your horse around the world, you come across all sort of things and you meet all kinds of people. Escaped prisoners that ask for your help, a shoot-outs around the corner of a rock formation, or a grizzly who does not appreciate your presence. Or you are simply lured into a trap and robbed by a rival gang. You feel free in the Wild West, but the Wild West is also free to do what it wants with you. It’s a survival of the fittest. Yipiekayee!

Lasso your way to the top

Okay, here comes the thing that I have been enjoying a lot. Give a man a horse, a lasso and a revolver and he will be entertained for quite a while. Lassoing random passersby from their horses and then tying them up and feed them to the crocodiles? No problem, anything is possible! Or tie them to the railway tracks? Yes, I feel the Dark Side in me grow stronger. Do not underestimate the power of the lasso, because every time I pulled someone off their horses with it, it put a huge smile on my face. I lasso my way to the top in RDR2.

The game offers so much more than shoot-outs, morbid moments, and a cool soundtrack. The real power of the game world that is RDR2 is in those moments where you are struck by this game’s serenity. The beautiful sunrise on a foggy morning. The picturesque environments that make you stop for a moment to take them in fully. This game continues to amaze me. Whether you are following the story or if you’re just free roaming, exploring its many textures and possibilities on your own. Man, I’m jealous of the people who have not played the game yet and who will experience everything for the first time. Is it Friday yet? I can’t wait to get back in that world. With my lasso of course.

Yassin recently joined Submarine Channel in the position of Impact Manager. He developed an unconditional love for stories at an early age. He grew up with his grandparents’ stories, cartoons, games, comics and so on. He was and still is addicted to stories, which is what motivated him to become a storyteller himself, so he could inspire others with great stories. Yassin started his career at Submarine Channel as an intern in 2014. He then worked as a storyteller at one of Amsterdam’s finest communication agencies, but now he’s back! Yassin spends his spare time writing and drawing. He’s currently working on both a book and a graphic novel. He visits the cinema on a weekly basis and he is a comic geek.