Checking out the back issues bin while next to you Darth Vader is yelling excitingly because he just found the missing comic to complete his X-Men-collection. Or, having a hamburger in the food court with not one, but six Jokers eating at a nearby table, some of them accompanied by their own Harley Quinn. If this doesn’t sound strange to you, you’ve probably been to a Comic Con or two. 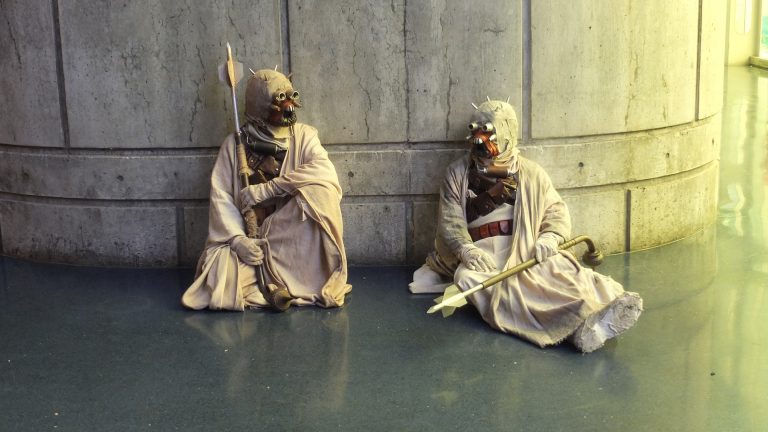 I’m talking about cosplayers: passionate fans that dress up like their favorite fictional characters. To me, cosplay is a wonderful part of fan culture. It’s great to see fictional characters come to life this way. Have a look at these five amazing cosplayers on Instagram who take their hobby to the next level.

Davy Jones Wins “Best Original Interpretation” at @comic_con Masquerade Ball Thank you all who went to see me and cheered me up This is my Last In year in this Type of contests! I had the most beautiful time participating in contests. Thank you @sofidavalosg for helping me out so much, @samhaincontactlenses and @ebaperformancemakeup and my Mom @claudiagomezaifd #PiratesOfTheCaribbean #POTC #DisneyPirate #YOHO #DavyJones #DavyJonesCosplay #DavyJonesMakeup #MakeupEffects #Prosthetics #SFX #ProstheticMakeup #TheFlyingDutchman #SeaLegend #JohnnyDepp #DisneyVillains #VillainsCosplay #DisneyLove #Horror #Fantasy #Creature #Monster #Kraken #APirateLifeForMe #Winner #Masquerade #ComicCon #ComicCon2018 #SDCC #SDCC2018

Davy Jones Wins “Best Original Interpretation” at @comic_con Masquerade Ball Thank you all who went to see me and cheered me up This is my Last In year in this Type of contests! I had the most beautiful time participating in contests. Thank you @sofidavalosg for helping me out so much, @samhaincontactlenses and @ebaperformancemakeup and my Mom @claudiagomezaifd #PiratesOfTheCaribbean #POTC #DisneyPirate #YOHO #DavyJones #DavyJonesCosplay #DavyJonesMakeup #MakeupEffects #Prosthetics #SFX #ProstheticMakeup #TheFlyingDutchman #SeaLegend #JohnnyDepp #DisneyVillains #VillainsCosplay #DisneyLove #Horror #Fantasy #Creature #Monster #Kraken #APirateLifeForMe #Winner #Masquerade #ComicCon #ComicCon2018 #SDCC #SDCC2018

Joo Skellington describes himself as a self taught plastic artist, international cosplayer and judge (in cosplay competitions). He dresses up as different characters and has a particular passion for Disney villains. He made a name for himself after posting a video of himself as Ursula from Disney’s ‘The Little Mermaid’. Thanks to his talents for make-up and prosthetics, Joo makes it seem like characters from the movies have really come alive. And that’s no small feat with larger than life characters such as Jack Skellington, Captain Hook, Edward Scissorhands, or Beast from Beauty and the Beast. Once he is in full cosplay mode, he really is transformed into the character.

Happy Independence Day🇺🇸🎇On this Forth of July, let us all strive to be more like Wonder Woman. Let us all remember where we came from, what we are now and who we want to be. Let us all stand up for what is right, and fight for those who cannot fight for themselves. After all, the one thing we all believe in is Love❤️💪🏻💙

Alan Nakin is a professional cosplayer from Dallas, Texas. She’s a true chameleon. Alan portrays a large group of characters, including HarleyQuinn, Wonder Woman, Supergirl, Batgirl, Snow White and Alice in Wonderland. She even crossplays as Archie and the Joker from time to time. Crossplay is a term to describe a cosplayer portraying a character with another gender.

Every once in a while she combines different influences and comes up with a new, mixed character. Because of this diversity, it’s always a surprise which character you’re going to meet when you check her Instagram-page.
Her outfits look great, and I particularly like the effort she puts into choosing the right location for her pictures.

The struggle to hold back the darkness of the Symbiote is real. We are Spider-Man. #spiderman #cosplay #marvel #spiderinferno #montreal #peterparker #symbiote #venom

Since I am a huge Spider-Man-fan, and wrote a book (in Dutch) about my lifelong friendship with the guy, I might be slightly biased when it comes to cosplayers dressing up as Spidey. The Montreal based cosplayer Spider-Inferno occasionally dresses up like Nightcrawler, Mr Fantastic or a super villain like the Riddler. But playing Spider-Man is his shtick and he does so on numerous occasions in all kinds of Spidey-suits. His wardrobe contains suits that are modeled after the suits from the movies, and after the different styles in which particular artists render the classic attire of Spider-Man.

Spider-Inferno is a very creative cosplayer. He reenacts comic covers and particular scenes from the books, has a nice sense of humor and, with the aid of a little Photoshop, sometimes becomes a real life wall-crawler.

I knew it!! @frans_heidenis did save the best for last!! This is the final photo of this series and I love it! Being the official Lucky Luke and working with such an incredible photographer really creates magic. So proud!! – #luckyluke #dutchluckyluke #officialluckyluke #lonesomecowboy #photography #thecowboyrules #portraitphotography #photoshopskills #adobephotoshop #photostudio #colt #coltsaa #bullet #coin #usdollar #wildwest #sunset #arizona #1885 #frontier #fransheidenis

Lucky Luke will always be one of my favorite comic book characters, but I am sorry to say I haven’t seen a lot of cosplayers dressed up like him. Except for Rutger Gret, whose get up is so convincing, the European publisher of the Lucky Luke comics christened him as the official Dutch and Belgium Lucky Luke. That’s no small feat.

Rutger also shows how he makes his costumes look as real as possible. I’m really fond of these little behind the scenes moments.

This Bat-tech doesn’t invent itself, you know. 💛🔧 . This is one of my favorite sides of Barbara – brainy, motivated, and self sufficient. I’m sure she spends a lot of time tinkering on the Bat gear between protecting Gotham, and training, and studying… and people say she doesn’t have super powers! 😜 . . . . Barbara Gordon/Batgirl from @dccomics Photo/comp by @johnnyporsche #batgirl #barbaragordon #cosplay #batgirlcosplay #batman #cosplaygirl #dccomics #gotham

Amanda Lynne calls herself the fan-girl next door. The LA-based beauty is one of the many professional cosplayers who mix great cosplay pics with sexy modeling pictures on their Instagram. Being a cosplayer can be a professional business, though some cosplay instagram-accounts could be considered borderline pornographic. However, this is not the case with Amanda Lynne.

I like her account because she’s able to convincingly transform into a lot of female characters, while keeping it lighthearted and humorous. It looks like she’s having a lot of fun being a cosplayer and to me, that’s the important part. She even met one of the greats in the comic book industry, and this pic alone made my day (and made me a bit jealous). She plays a lot of female super heroes, villains, but also comic characters like Death from The Sandman by Neil Gaiman.

These are two of my favorite Instagram accounts that focus on more than one cosplayer or groups.

Jfhcosplay focuses on Dutch cosplayers, gamers and vloggers.
Cosplay in America is the Instagram account of Ejen Chuang to complement his book on the same subject. Great pictures of cosplayers with short interviews.