What are we reading/watching/playing this winter?

What are we reading/watching/playing this winter?

Yes, we’ve entered a new decade! The start of a new decade also means that the Oscars are coming up and that we will all be binge watching some exciting new stuff. Winter is thus the perfect time to catch up on shows, get hyped for new films, and dive into some (comic) books. We asked around the office to see what everyone is reading, watching and/or playing this winter in order to get you started.

I definitely want to go to the Filmhuis in The Hague to see the ‘Apu Trilogy’. The films are by Satyajit Ray – an Indian filmmaker from the 1950’s. I’ve wanted to see them for a long time. Apparently, these films have been a source of inspiration for Wes Anderson and Martin Scorsese. He is the most well-known Indian arthouse filmmaker and has made three films, the Apu Trilogy. All three are going to be shown at the film house so I will definitely go to those.

I also want to go to ‘Love in the Afternoon’ (trailer) with Audrey Hepburn, in LAB111. I have seen all Audrey Hepburn films on the list except this one. And it’s a Billy Wilder movie and I love Gary Cooper, so it’s a combination of all the elements that I love. I’m also going to continue watching the ‘Mandalorian’ (trailer), which I have mixed feelings about, but I do enjoy. I will probably also go to the new Star Wars for a second time. It was a deep disappointment that I experienced, but I am still keen on seeing it again. In any case, those are the movies and series I will be watching over the winter.

Oh, I really want to see ‘Little Women’ as well. I don’t know when it will be released though. It’s by Greta Gerwig and once I saw the trailer, I was sold right away. Though ‘Lady Bird’ (trailer) was great it was not quite my thing, but ‘Little Women’ (trailer) feels right up my street. I recently also saw ‘Marriage Story’ (trailer), which was amazing, by Noah Boumbachs, Gerwig’s partner with whom she also did ‘Frances Ha’ (trailer). After ‘Frances Ha’ Gerwig started making much more interesting films, so I am very curious to see what she has done with ‘Little Women’.

Book-wise, I always have ‘Orlando‘ by Virginia Woolf with me, but I still have to read it. As in, I kind of have to start it, but I haven’t gotten into it yet. Maybe I’ll read something by Ian Forrester instead because I read ‘A Room with a View‘ a few months ago and thought that was super good. I first read the book and then watched the film. So maybe I’ll read some of his books along with watching their film adaptations. I will probably find a book somewhere in a bookstore though and just read that during the winter.

For gaming, I still have ‘Spiderman’ for the PS4. I have already started playing it, but I haven’t gone any further with it. I also have the ‘Witcher’, but I feel like I’m not going to have time for gaming.

This winter I’ll be watching Audrey Hepburn’s films at LAB111. I’d love to see some of the classics in a theatre and discover new movies with her in it. I also still wanna see ‘Honeyland’ (trailer) after the good responses I’ve heard at IDFA and ‘The Marriage Story’ on Netflix. Perhaps I’ll watch ‘Little Women’ (trailer), ‘Parasite’ (trailer), ‘Jojo Rabbit’ (trailer) or ‘Bombshell’ (trailer) this winter as well!

Reading-wise, I want to read some scripts from the Oscar’s shortlist, but I still have to check which are available. I prefer reading scripts over books, as it reads quicker, is more visual and it is a lot of fun seeing the scripts come to life in the movie theatre! I did get the book ‘Lekker Laten Lullen‘ from a friend of my sister who wrote it, so I should read that or the book ‘Everything is F*cked‘ that I got from a friend who said it inspired her, though the title doesn’t encourage me to read it, haha.

I’ve wanted to order ‘21 Lessons of the 21st Century‘, but I’ll probably be quite busy and end up reading the Vogue Holiday Special instead. I will be listening to warm Christmas songs and listen to some DJ’s and sounds, while it’s dark and cold outside. My winter will probably start with a visit to ‘Het Hem’, curated by Nicolas Jaar & Orpheu the Wizard. I can probably continue on going. I want to see, read, and listen to so many things! Time flies, so let’s go.

Well, I have a film tradition during the winter. It’s one of my all-time favourite films and to me it’s all about what winter truly is all about. Spending quality time with family and thinking about new resolutions for the new year and decade. Let’s be honest, there is only one film that embodies the winter season like no other: ‘The Godfather’ (trailer). It’s all about family and new beginnings. Okay, sure there is some bloodshed here and there, but it’s the perfect film to watch during the dark and cold season.

The second film I’m planning on watching is ‘Star Wars: The Rise of Skywalker’. Star Wars is the first franchise that made me see how toxic the fan community could be. I love The Last Jedi and I consider it as the second-best Star Wars film just behind The Empire Strikes back, but unfortunately the fans don’t agree with me. The Last Jedi was a bold move and Rian Johnson is hated because he tried to do something different. “Let the past die. Kill it, if you have to.”, said Kylo Ren when he unfolded his plan to start a new order. After the backlash from the toxic Star Wars community, I’m afraid J.J. Abrams will ignore the bold steps taken in The Last Jedi and serve us a mediocre action-packed and fan-pleasing conclusion with The Rise of Skywalker.

I grew up with Pokémon and used to play the first generation on the GameBoy a lot. I was totally hooked, but while busy growing up, I lost track of the franchise. Like most of the world I got back in touch with the franchise when they released Pokémon Go. When they announced Pokemon Sword and Shield it was kind of a no-brainer to me. I bought Pokémon Sword last month and I haven’t had the time yet to complete the game. I’ll definitely use my spare time during the winter to complete the game and to catch ‘em all.

I’m really looking forward to reading ‘The Testaments‘ by Margaret Atwood this winter. I read ‘The Handmaid’s Tale‘ in the beginning of November and thought is was absolutely amazing – I finished it in a week! The novels are set in the near-future in a totalitarian state where the American Government is overthrown and ruled by divine law. I am a huge fan of dystopian novels like these. Writers like Margaret Atwood, George Orwell, and Aldous Huxley are definitely some of my favourites. ‘The Testaments’ came out quite recently and is set 15 years after the events of ‘The Handmaid’s Tale’ so I am definitely excited to read what has happened in the meantime. There is also a series about ‘The Handmaid’s Tale’ which I still need to watch as well. I definitely want to finish the books first though.

Another series I am really looking forward to watching is the anime series ‘My Hero Academia’ (trailer). It’s a Japanse manga series that one of my housemates has recently been hyping, so I am looking forward to getting into that. Movie-wise I really want to see ‘Parasite’ (trailer), a South-Korean dark comedy. I don’t know a lot about it apart from the fact it is supposed to be really good and that it is directed by Bong Joon-ho, who also directed ‘Okja’ (trailer).

Gaming-wise I am definitely looking forward to continuing, and hopefully finishing, GRIS. GRIS is an indie adventure puzzel game developed by Nomada Studio’s. You play as a young girl named Gris, who has gone through a traumatic event and needs to find her voice. As you play, the world unfolds and is brought to life with absolutely stunning artwork, detailed animations and an amazing soundtrack. It is probably one of the most beautiful games I’ve played. 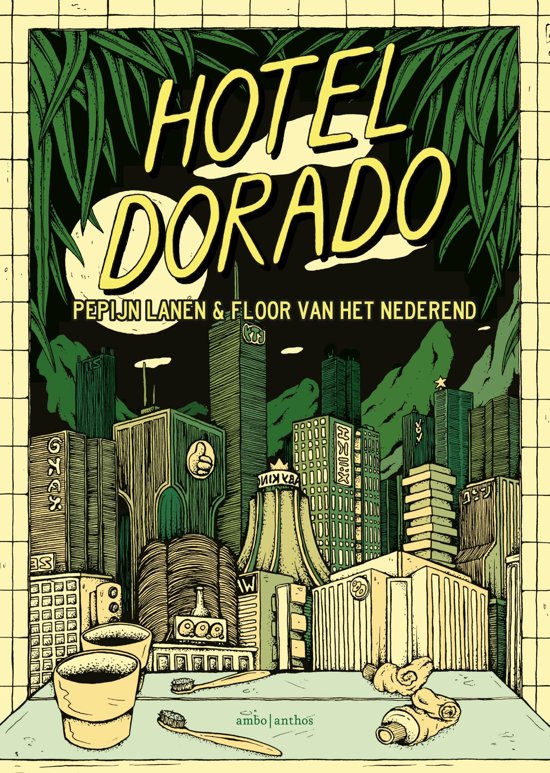 In terms of films, I have a running ‘Harry Potter’ (trailer) marathons with two good friends, we are now on part four. But we only do this once every few weeks, so alongside that I would really like to delve into several documentary directors such as Eva Stefani for example. I also still want to see ‘Marriage Story’ (trailer)!

In terms of reading, I am planning on reading the imaginative roman ‘Tijdmeters‘ by David Mitchell. I would also like to read more from Haruki Murakami such as ‘Blind Willow, Sleeping Woman‘. I also have the graphic novel, ‘Hotel Dorado‘, by Pepijn Lanen at home. Usually I am not really into the graphic novels, but I am a big fan of Pepijn so I am quite curious.

I don’t really play games, but I do play board games. I really like Ezelen. It is very simple but really fun. For the rest, I usually don’t mind that much. I am also not very good at board games but I do like them.