It’s a common cultural law: in turbulent times people need escapism and so the demand for fantasy and science fiction stories rises. But in our own complicated digital age of political and economical unrest one genre in particular is having an extraordinary popularity boost: the dystopia, being both escapism and cautionary tale. Dark and misantropic visions of the present and future of mankind are all around us, telling us fearful stories about where we are heading as a species. 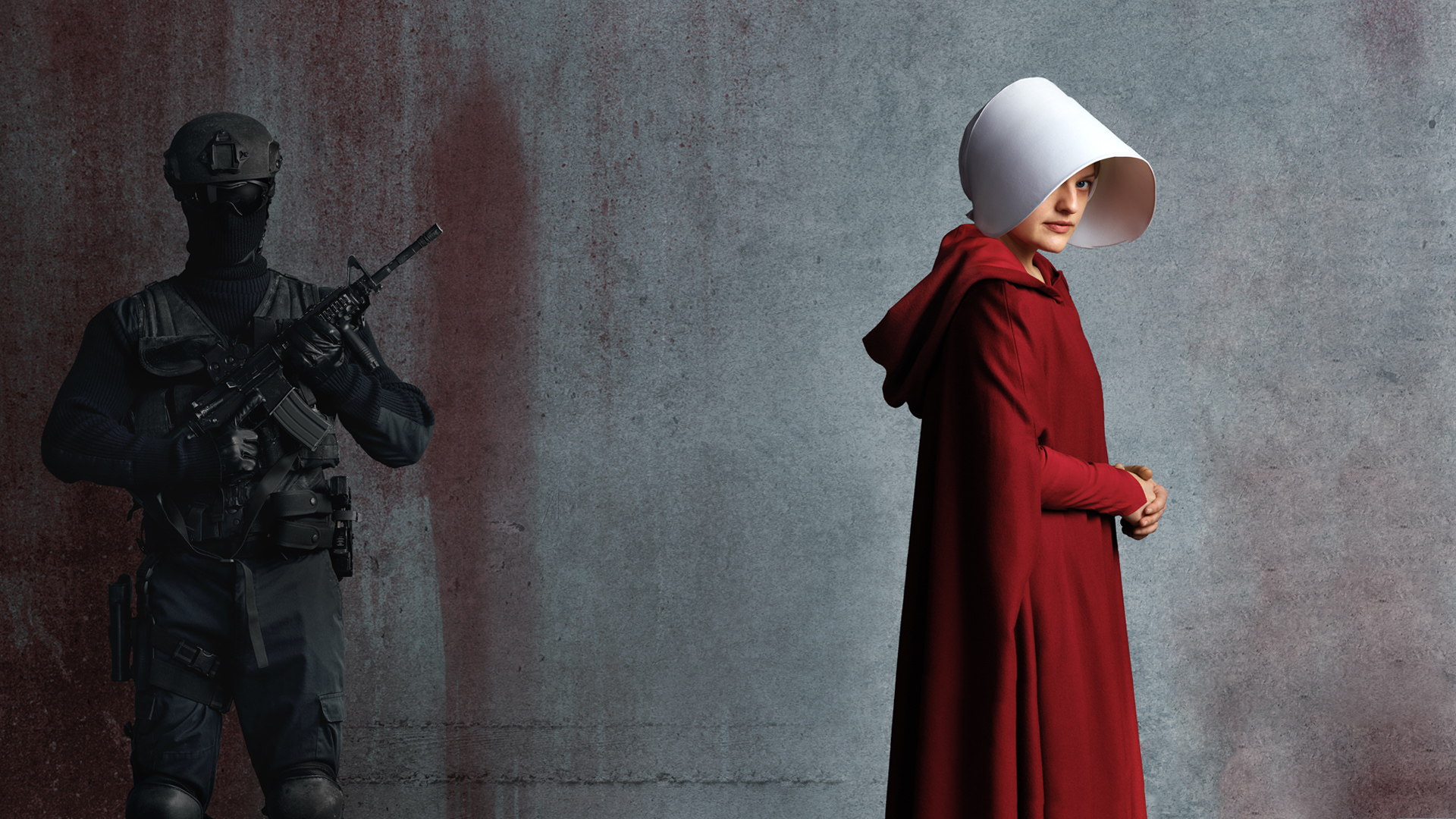 As part of the release of the dystopian motion comic Ascent from Akeron, Submarine Channel looks at the best dystopian stories in popular culture. Previous Top 5: Best Dystpian Tales Ever Told in Comics.

The Man in the High Castle

Dystopian stories are not necessarily also science fiction stories about a faraway future. Some of them are What if-stories. What if history took another turn? The Man in the High Castle, based on a novel by Philip K. Dick and currently an Amazon Prime series, is such a story. What if the Nazis and the Japanese won the Second World War?

The story takes place in the sixties and the US is divided into the American Reich and the Pacific States under Japanese rule, separated by a Neutral Zone. We follow several characters living under both occupations. In East Coast New York Nazi officer John Smith (Rufus Sewell) hides his son’s hereditary illness because of the Nazi’s eugenics politics, while he navigates the power struggle caused by Hitler’s death. In West Coast San Francisco  Juliana Crain (Alexa Davalos) witnesses her sister, a member of the resistance, being killed at the hands of the Japanese. But not before she hands her a film that Juliana has to deliver to the legendary Man in the High Castle in the Neutral Zone. The film – a book in the original novel – shows our reality wherein the Allied Forces won the war. And then there is Trade Minister Tagomi (Cary-Hiroyuki Tagawa), who discovers that he has the ability to travel to other realities.

The TV series extends the premise of Dick’s novel – that mostly focuses on art and re-appropriating your culture as a means to resist – with the multiverse theory, but both are equally relevant as a cautionary tale for our times wherein fascism is on the rise again.

If this teaser is not enough, watch the half hour official recap of season 1 and 2 on YouTube.

The Hulu series The Handmaid’s Tale is also based on a novel, by Margaret Atwood, and like The Man in the High Castle it is a What if-story, but set in a time much closer to ours. It could be our own present.

Humanity’s future is endangered by a global infertility crisis and the US has been torn apart in a devastating civil war, won by the forces of what is now the Republic of Gilead. Gilead’s commanders have some extremely misogynistic ideas on how to deal with the crisis. Women who are fertile are made into breeding machines for the elite: the Handmaids, who are ritually raped in the presence of the Gilead Wives. The story focuses on the Handmaid June (Elizabeth Moss) and Offred (which means ‘of Fred’). Offred is stationed at commander Fred Waterford’s (Joseph Fiennes), whose wife Serena Joy (Yvonne Strahovski) is one of the architects of Gilead’s theocracy. Serena is intelligent and gifted but also cruel and bitter. The two women develop a complicated relationship as Offred tries to survive in the Waterford household. Both actresses deliver impressive performances.

If The Handmaid’s Tale reflects the Evangelical fear of science and the conservative nostalgia for a past that never existed, then Altered Carbon embraces the opposite. This Netflix series is a faithful adaptation of Richard Morgan’s cyberpunk novel and dives deep into the Frankenstein dream of our age: transhumanism, or the creation of a better human species by scientific progress. Think designer DNA and cloning. But it wouldn’t be dystopian without also addressing the fragmenting effects of those technologies on human identity. If this reminds you of Blade Runner, that’s no coincidence. Altered Carbon is not only visually indebted to Ridley Scott’s cinematic masterpiece, but also thematically.

Main character is the rebel Takeshi Kovacs (Joel Kinnaman), who is punished by being put into cryogenic sleep for 250 years and finds himself in a new body when he wakes up. After his release he is hired as a private eye by billionaire Laurens Bancroft (James Purefoy), who has bought an endless supply of cloned bodies for himself and his family, but wants to know who is trying to murder him clone by clone.

The Altered Carbon world shows a form of hyper-capitalism that even surpasses our own capitalism in terms of speed, and its 1% hasn’t improved with the existence of eternal life. Its rich are even more dysfunctional, megalomanic and depraved than our own.

Altered Carbon would leave us with little hope if it wasn’t for Poe (Chris Connell): an AI hotel owner with more empathy than most men of organic origin. Poe’s love of Edgar Allen Poe provides us with some necessary comical relief.

No contemporary vision on our nearby future reflects the digital age so strikingly as the BBC series Black Mirror.

Black Mirror is the brainchild of Charlie Brooker, who earned his credentials as a humorist, screenwriter, author, producer and presenter. Every episode of this anthology is a complete story that addresses a theme connected to our digital age. Sometimes the line between fiction and reality seems dreadfully thin. Like the episode about a soldier who discovers that the monsters he is supposed to kill are not monsters at all, but frightened people just like himself, whose appearances were changed by technology. Technology as an allegory for xenophobia.

Another apt example of life imitating art was the episode ‘Hated in the Nation’ about robobees. These robotic bees are sold as the ultimate solution for the global pollination disaster after the natural bees have died out. But robobees are being hacked and used in a deadly popularity game on social media. Shortly after that episode the news spread that real robotic bees are in the making.

All episodes of Black Mirror are like this: beautifully wrought views on the consequences of the digital revolution on humanity. And the future is not a pretty sight.

By now you must be wondering: why in the hell do people watch dystopian stories? Perhaps because dystopias provide lessons on how we can avoid those dark futures. How? By connecting to and caring for each other.

It’s an often forgotten fact that we are a species that thrives because of our social abilities. And there are few dystopian stories that proof this so well as Orphan Black, a tv show by BBC Canada – which may be quite telling since Canada proudly embraces the democratic socialism that is so controversial in its great neighbor the United States.

Orphan Black focuses on the concepts of human cloning and nature versus nurture. Key character is the British grifter Sarah Manning and her clones, played by Canadian actress Tatiana Maslany who delivers a groundbreaking performance. Besides Sarah there is also soccer mom Alison, evolutionary scientist Cosima, ruthless business CEO Rachel and the tragic Russian Helena, who is trained as a professional killer. All female clones, fourteen in total, are products of Project Leda. They are also subjects of special interest for several other shady organizations locked in a power struggle with each other, including a Project Castor, dedicated to the creation of an army of super soldiers. But while the male Castor clones are plagued by fatal flaws causing them to malfunction, the female Leda clones survive by bridging their differences and creating strong mutual connections. After all, the ability to work together is our greatest evolutionary advantage as a species.

Natasja van Loon is an editor at Zone 5300, a Dutch magazine for comics, culture and curiosities, and a publicist at Machina, a magazine about living in the digital age. She also reviews books, tv, movies and music, and works as a freelance press officer and PR and communication consultant for several organizations like the comics festival Stripdagen Haarlem. She loves art, history, philosophy, science, politics and all forms of storytelling.